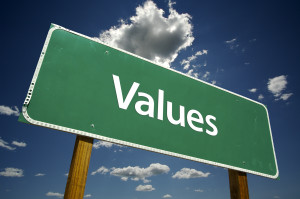 Practice positivity by listing the values that are most important to YOU and trying to live them out each day.

One of the most pulling subplots to the travesty that was the Holocaust is those who risked their lives to shelter the Jews.  Some took this a step further, using their positions of power and authority to find ways to allow Jews to escape to locations of safety. One such man was Aristides de Sousa Mendes, a Catholic diplomat who served as the Portuguese counsel general in Bordeaux, France during the war.  As Portugal was neutral in the war, de Sousa was in a unique position to grant visas for Jews looking to escape.  Despite a law that was in place requiring prior permission before travels were approved, de Sousa and his staff managed to grant thirty thousand visas in the course of three days.  For his actions, his superiors with the Portuguese Foreign Office dismissed him of his duties and stripped him of his rank, salary and pension.  Regardless of all he lost, even years after the fact, when de Sousa spoke of his actions, he was clearly proud of his decisions.

De Sousa’s example raises a question of the decisions leaders make and the possible actions and reactions.  According to an article recently completed for The Huffington Post, leaders face difficult decisions like de Sousa’s every day; granted, not all of these choices are a matter of life or death—and, as a result, the gap between competing values can be less wide—and, therefore, the better choice between the two can become less clear.  An everyday application of this gap is provided in the article, as leaders of a family struggle with how to provide sufficient monetary funds for their family and still find time to spend valuable quality time with said family.

The article advises a common practice encouraged by life coaches to help in navigating the gap between competing values. Often, coaches will suggest their clients create a values list, which contains ideals and principles most important to the individual. Some examples provided include caring, decisiveness, being family-oriented and loyal.  To develop this list, coaches often guide the author through decisions and times of contentment experienced in the past.  Which decisions have provided a sense of pride? Which experienced accomplishments resulted in the most contentment?  From this, the client can often discern what their priorities in life are—what they value the very most out of life.