Courtney Lapresi closes this past season of MasterChef as a winner of not only the title, but a cook book deal and a $250,000 price prize.

Recently, Fox cooking reality television show MasterChef’s fifth season came to a close, pronouncing another winner in the process.  Courtney Lapresi outlasted dozens of competitors and managed to tolerate the terrible tongue of Gordon Ramsey—the show’s infamous host—to win the title of the MasterChef.  With the title came a cook book deal and a two hundred and fifty thousand dollar price prize.

In addition to this achievement and winnings, recently Lapresi’s notoriety from her victory on MasterChef has earned her a new position; she has been chosen to headline a cruise, according to an article recently completed by USA Today.  The position is on a culinary cruise on Holland America Line’s Westerdam; the cruise takes place from the fifteenth to the eleventh of November. One thousand eight hundred and forty eight passengers will call the cruise home for the duration of the journey, as it pursues an itinerary through the Eastern Caribbean.  Stops on the trip include Grand Turk, San Juan, St. Thomas and Half Moon Cay, Holland America’s private island.

The cruise is Holland America’s first MasterChef endeavor; Lapresi is the first headlining chef to run the culinary component of a cruise for Holland America to come from the reality show. For Lapresi’s contributions to the cruise, she will hold several panels.  One panel will focus on showing amateur chefs various tricks of the trade employed in professional kitchens.  Another panel focuses on tips for finishing touches to be placed on various dishes.  Specifically, the tips provided seek to help make dishes more appealing or delicious—small final flairs to add just a touch of something different, unique and tasty.  In addition to these panels, Lapresi will also be responsible for holding cooking sessions and mingling with guests at cocktail receptions.  Finally, Lapresi must take part in a mystery box challenge—an obstacle which seeks to replicate a challenge that Lapresi first faced in her time spent on MasterChef.

The Organizational Influence of Chefs 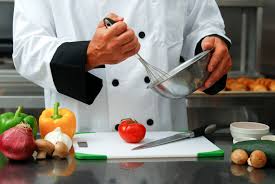 A great chef is extremely organized and prepared with only the necessary tools and ingredients that he or she needs for that specific dish.

If you are seeking a more “ordered” life, then maybe you should think about adopting some of the organized behaviors of a chef. In an article by NPR, we are made aware that  Americans have been enjoying following and eating like celebrity chefs. They have even been interacting with them on social media websites, like Twitter. People try and learn as much about food and cooking from their favorite celebrity chefs, but could they actually learn more from them than just food? What about how to be more organized?

According to recent research of consumer habits, Americans have been spending a great deal of money, $10 million to be exact, on self help books. This has made the market huge and very profitable. People speculate that the market is so big because most colleges and grad schools don’t teach their students about organization and how it should be used in their day to day lives. One place that does teach these types of life skills is in culinary schools and in professional kitchens.

One way chefs and kitchen workers organize themselves in the kitchen is by planning and setting out ingredients and supplies before they need them. This saves time and energy for later when they actually need the supplies. The system or mantra that kitchens use is a French phrase “mise-en-place” translation “put in place.” It means to the French, gathering and placing the ingredients in an order for cooking. However, for many chefs and their staff in America, the phrase has a deeper meaning. They view this phrase as a way of life and a way of “concentrating your mind to only focus on the aspects that you need to be working on at that moment and to rid yourself of distractions.” This is according to Melissa Gray, a senior at the Culinary Institute of America. This is a skill that many students take with them to their daily lives and into their work lives. For example, after Melissa was taught this phrase in class, she was able to go home and reorganize her home office in such a way that the items she used the most were in arms reach for her.

It is apparent that when you apply organization in one aspect of your life, it becomes natural to apply it elsewhere. Careers as chefs and kitchen workers are of course not the only careers in which organization is necessary or executed, but it is a solid foundation to refer to when it comes to the day to day logic.

This portion control cheat sheet can help you eat and waste less food.

According to an article recently completed for Chef 2 Chef, most professional chefs are far more focused on feeding people and forget all too frequently the prevalence of world hunger.  Members of any branch of the food service industry cannot deny that, on the path from the delivery dock to the customer’s plate, a lot of aspects of foods and products go to waste.  For further proof of this, the article references a study completed by the Food and Agricultural Organization of the United States, which indicated that approximately one third of the food that gets produced for human consumption in the world is lost or wasted.  In the United States, this statistic increases to one half of the food created.  The amount of food wasted could go towards feeding the millions in the world who have far too little food.

The first issue addressed by the article is why the United States is particularly guilty on this offense.  According to Civil Eats, a blog completed by Amber Turpin, the food grown and farmed in the United States is done in massive quantities and trucked all over the country.  This process naturally leads to surplus and spoilage due to travel constraints; often the food is thrown out before it could have been safely consumed.  In addition to this, in relative terms to the rest of the world, food is cheap in the United States.  When the consumer can upgrade to the large fry for only one dollar more, they are inclined to do so; however, buying more doesn’t increase what we can eat and often results in more thrown away food.  Alternatively, in nations where food is expensive, waste is a far less common problem on the consumer level.

The article also offers up its own explanations for the heavy reliance on waste in the United States.  Often, consumers seek to make recipes that involve odd ingredients.  The ingredient is purchased and only used rarely to repeat the recipe.  This process results in the rest of the product being thrown away once the expiration date has come and gone.  There is also a cultural expectation that food must be visually appealing to be consumed; the slightest sign of imperfection results in further unnecessary waste.

Several solutions are presented, most of which are to be taken on the part of chefs.  Developing relationships with local farmers could work symbiotically, with fresh produce no longer going to waste.  Reasonable proportions should be presented in every meal; or, as an alternative, allow customers to choose their own portion sizes.  Composting should be engaged and education should be sought on how to store food to get the maximum usage out of it.  Solutions are offered from the Environmental Protection Agency, where sustainable practices are encouraged.  Feed hungry humans and animals with any leftover or unnecessary food.  Compost can also be sought, to meet the needs of soil.