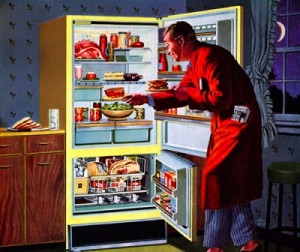 Midnight Snacking has direct and indirect consequences for dieters.

People who struggle to lose weight know one of the mortal enemies of the dieter is the late night snack.  Everyone from your mother to Oprah has probably told you that eating late into the night is one of the worst things you can do if you are trying to drop those extra pounds.  A new study out of the University of Pennsylvania has confirmed the idea.  Some of the reasons are extremely obvious, but others are more opaque.

Perhaps the most obvious reason is that the more hours you are awake, the more actual time you have to consume food.  The study found that the average person who is awake between 10PM and 4AM takes in almost 600 more calories than their early-to-bed counterparts.

One of the less apparent reasons to hit the sack early when dieting is that you pay for your late night on both ends.  People who get less than 8 hours of sleep generally wake up hungrier.  Your body hasn’t replenished the proper amount of nutrients with rest so your body will try and compensate by telling you that you’re hungry.  Specifically, the study found that those people deprived of sleep have more ghrelin, a chemical that induces appetite, in their systems.

Lack of sleep also affects your willpower.  When your body is tired, you have less control of your impulses.  You are more likely to indulge in unhealthy foods when you haven’t gotten enough sleep, but the damage doesn’t end there.  Eating unhealthy foods begets a greater desire for unhealthy foods.  You will condition your body to crave junk making it even harder to resist.

If you haven’t gotten it yet, the moral of the story is make sure to get your full eight hours of sleep, especially if you’re working to drop some weight.  You can check out a full recap of the study on Yahoo.com’s Healthy Living blog.