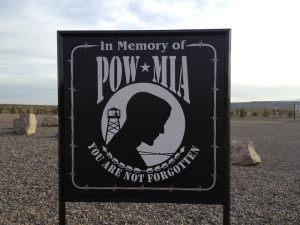 National Prisoners of War and Missing in Action soldiers’ were honored for 24 hours at a vigil in Meadville, Pennsylvania.

On Friday, an event was held to commemorate National Prisoners of War and Missing in Action soldiers’ day.  The event was entitled the Twenty Seventh Annual Twenty Four Hour Prisoners of War/Missing in Action Vigil, according to an article recently completed by The Meadville Tribune.  For this year’s vigil, Nikki Mendicino, a POW/MIA advocate from near Pittsburgh, Pennsylvania, served as the keynote speaker.  Mendicino kept her comments brief, with perhaps the most noted part of her speech serving as her simply stating that she and the audience had come together to honor and remember all the heroes of war that did not make it back home.

In attendance of the vigil, there were a series of a few noted guests.  Phil Davis, a veteran of the Vietnam War, introduced one of the most notable Prisoners of War attending the event—Harold Beerbower of Meadville.  The article offered Beerbower’s background, including how he found his way into the army and imprisonment in the opposing soldier’s camp.  Beerbower quit school and joined the army in 1951 to join the Korean War effort.  By April of that year, he served as a member of D company 7th Infantry Regiment, third Infantry Division.  However, on the twenty fifth of April 1951, he was captured.  For the next twenty eight months, Beerbower was kept as a Prisoner of War in a camp.

One small blessing was that Beerbower was not alone in his imprisonment; Harold Andrews, a Crawford County native, was interred in the same prison with Beerbower.  The pair was held in the prison together until their release in August of 1953.  Typically, both Prisoners of War attend the Annual Twenty Four Hour Prisoners of War/Missing in Action Vigil together, in the hopes of someday helping in the return of the Missing in Action heroes.  However, unfortunately, this year Andrews had a family obligation and was unable to attend alongside his friend. Regardless, Beerbower proceeded to attend the event , as per usual, and continued to work towards bringing missing soldiers home.